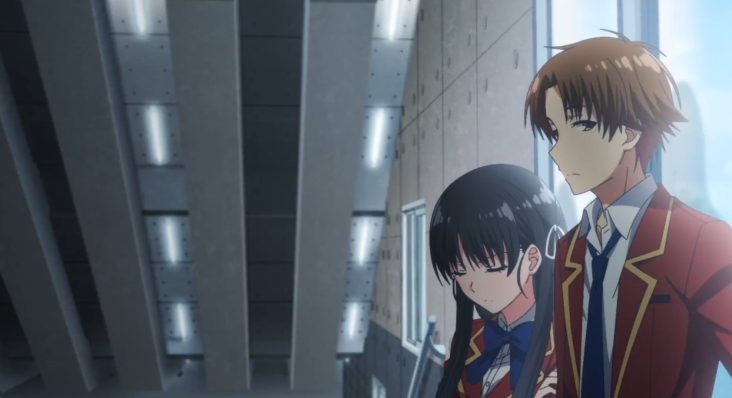 Classroom of the Elite fans will be delighted to know that earlier this week (May 30th), a new poster for the second season just got tweeted out by the official Classroom of The Elite Twitter account. 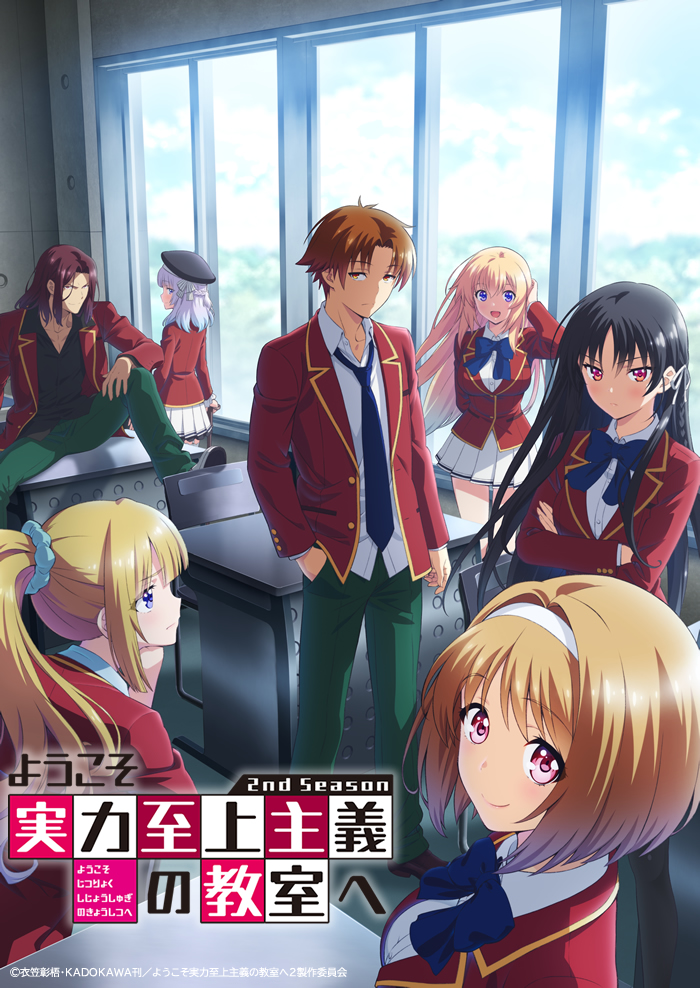 New Poster for the Second Season

The official Twitter account has tweeted, just a day after the new poster’s release, the second season’s official release date. Save the date: July 4, 2022 (Monday) is the day when Classroom of the Elite anime’s second season will be broadcasted on multiple channels… In Japan. 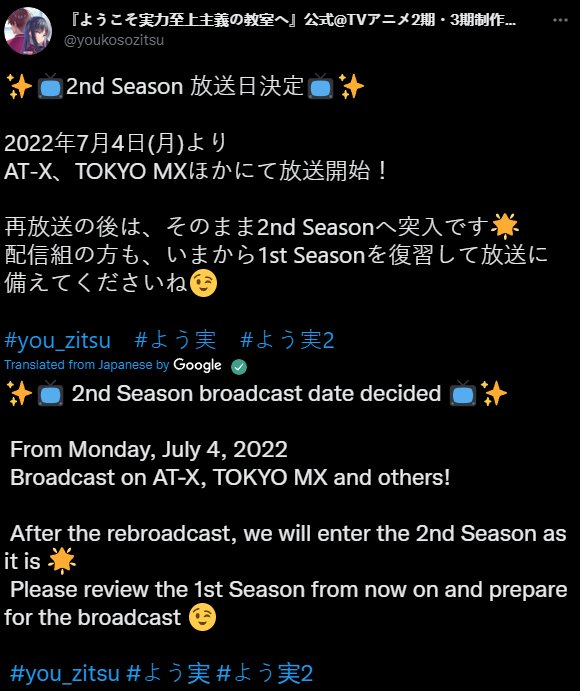 Alright, I’m just messing with you, Crunchyroll has already announced that it’ll also be releasing the second season in July. It’s safe to say that episodes will be available internationally almost immediately after they’re released in Japan.

Where Can I Rewatch The 1st Season of Classroom of the Elite?

Of course, there are the usual streaming services like Netflix and Crunchyroll. Those are always reliable sources to watch your favorite anime.

But for those of you who don’t want to spend your class points on these streaming services, there is another option. And no, I’m not talking about pirating/downloading it. You can check out the Muse Asia YouTube channel, they own the IP (Intellectual Property) for tons of anime. This means they are legally allowed to post their anime on their YouTube channel for everyone to watch FOR FREE!

What’s better is that recently (and I mean really recently, literally an hour ago from when I’m writing this) they have started posting the 1st season of Classroom of the Elite. They usually post the next episode of a finished anime the next day so the full season should be in their library in 12 days or so. Go check them out!

If you don’t feel like watching the entire season or don’t have the time to, here’s a little recap of what happens:

We follow the story of Kiyotaka Ayanokoji a reclusive young man as he enters the Tokyo Metropolitan Advanced Nurturing School. A school for the elite to hone their talents and skill before setting out to the real world *cough*Japanese Harvard*cough*, a school wherein all graduates have had a perfect employment rate.

But even the top of the top has its bottoms. For this school, it’s the class designated as D class. This is where Ayanokoji gets placed in. Due to several demerits for not doing well in their studies, the entire class is put in a situation wherein any student who fails an exam gets expelled immediately. He meets Suzune Horikita and together they try to keep anyone in their class from failing and to promote their class to A class. 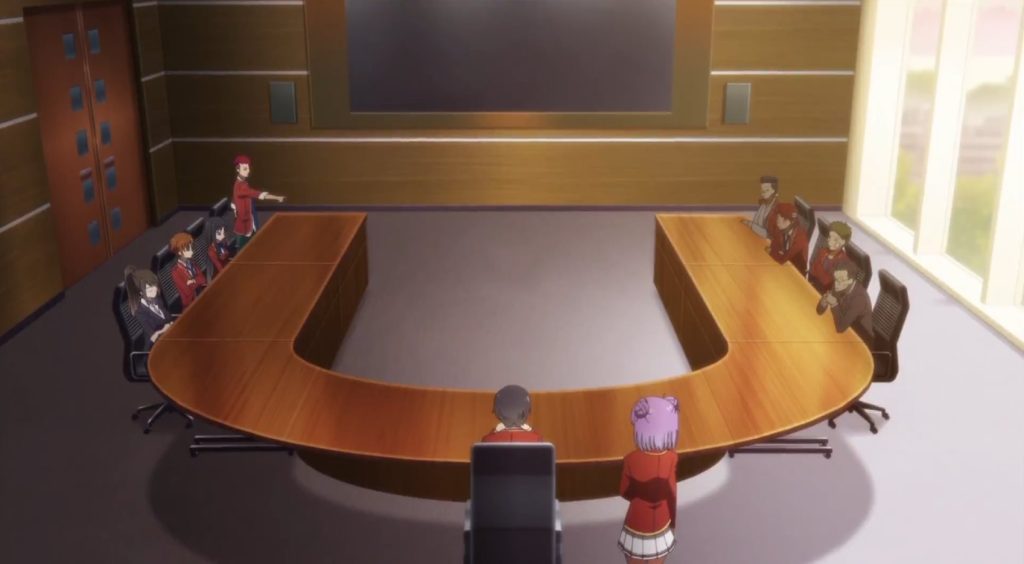 The Trial Against Sudo, A D Class Student Charged With Assaulting Another Class’s Students

Being the lowest ranking class, however, makes them the primo target for the other classes (very cool elitists, very relatable). They however survive any attempts on them (including a bully/fight claim) and the whole class makes it through the semester intact.

The school then sends the class to an all-expense-paid vacation on a tropical island. That “vacation” turns out to be some kind of Lord of The Flies type of test because if you want to be a contributing member of society you need to know how to survive on an island with limited resources… I guess? 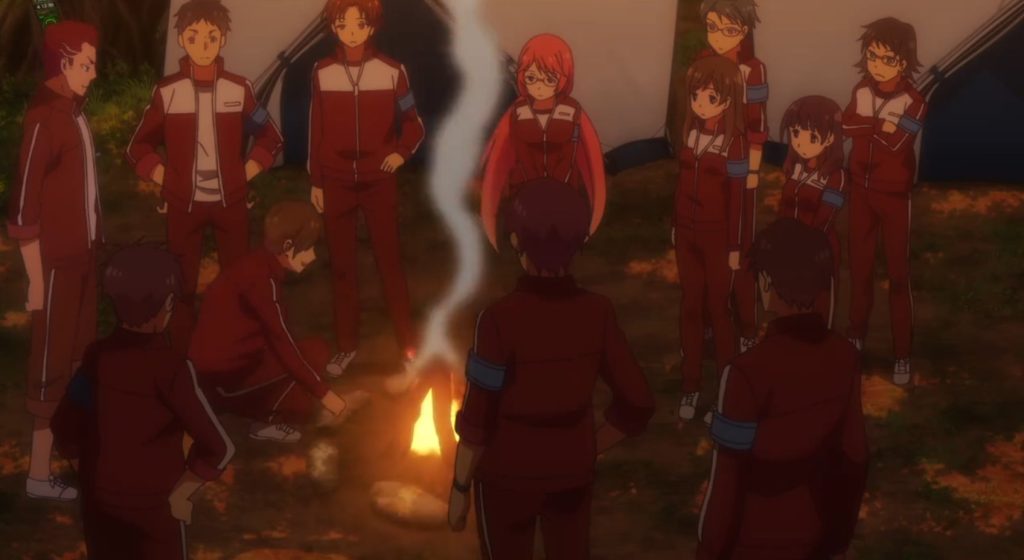 Weird plot points aside (did I mention there was an underwear thief in that island arc?), the D class makes it through the exam with the highest points, to the surprise of the rest of the classes.

Throughout the season you’ll start to notice a pattern of people not being who they say or show they are. A lot of characters having hidden dark sides. Well, right at the end of the season, through an internal monologue, it’s revealed that Ayanokoji himself turns out to be a cruel and apathetic person who’s willing to step on other people to achieve his goals. Leaving us all on a cliffhanger.

So that’s that. What are you’re thought on what could happen in the second season (if you haven’t read the manga yet that is).

And while you’re waiting for the second season, here’s an anime you can check out. 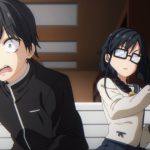 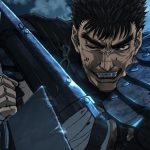