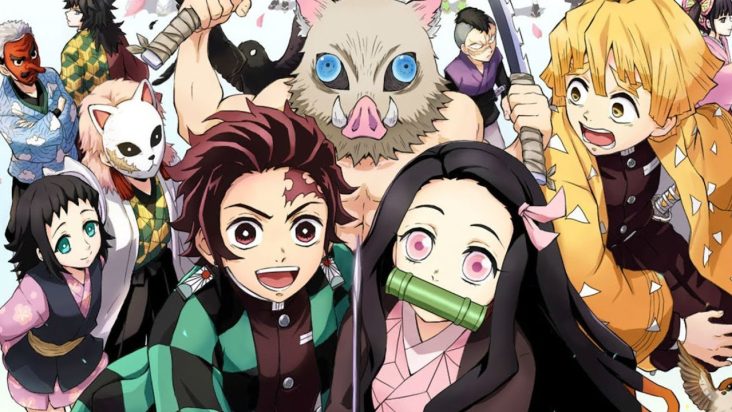 It’s probably a guessing game to know how tall your favorite Kimetsu No Yaiba characters are. Truth is, there’s only a minimal description that speaks about the height of these well-loved characters. But if we base it on creator discussion and fan guess, their height could  roughly be estimated.

Tanjiro and Nezuko Kamado are deemed short for an anime character, but can be average for the Demon Slayer series. Nesuko Kamado has an estimated height of 5″ (152.4 cm) while Tanjiro measures 5’5″ (165.1 cm).

As the episode progresses, height of the characters may eventually change.

Demon Slayer is currently running on its third episode, including a movie. Kimetsu No Yaiba has extracted complex characters from an original  Manga series and they’ve been developed  even better. Fans worldwide are on the hype of waiting for the third series to be released soon.

Below is the height summary of demon slayer characters (in ft. and cm ). This is based on the seasons 1 and 2 of the anime series: 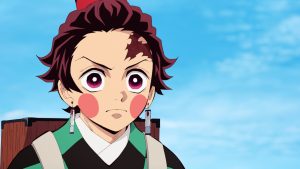 There was no exact number to describe the height of Tanjiro during the first season of the series because he started as a child. But come episode 3 of season 1, he measures 5’5″ (165.1 cm).

He may be short for the role of a demon slayer, but Tanjiro plays a dominating character in the series. The demonization of his little sister Nezuko triggered the turning point of the story.

This was a deciding factor for Tanjiro to join the demon slayer corps hoping to find an antidote for his sister and to avenge her sibling from the wrath of the demons. Nezuko is one year younger than her brother Tanjiro. This implies  Nezuko might be shorter than Tanjiro with her height measuring 5″ (152.4 cm).

Though she wasn’t the shortest demon slayer, her height was a contributing factor of her vulnerability. Having turned demon at the age of 12, Nezuko has never aged physically. Hence, it’s why she’s fairly small. 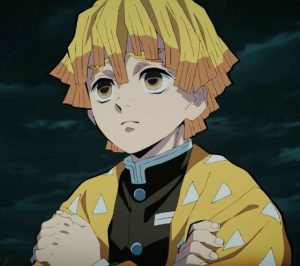 Zen’itsu Agatsuma is a year older than Tanjiro, but both characters  have similar height measuring to 5’5″ (165.1 cm). For some reason, Zen’itsu is notorious on being a coward, unlike Tanjiro who never bowed down to all the villains on his way.

Zen’itsu doesn’t have a firm mastery on the use of sword which is manifested by his coward personality. 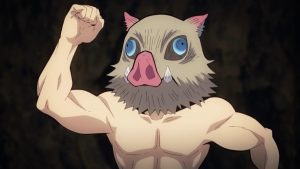 Having a height measurement of 5’5″, Inosuke Hashibira holds a reputation of a skilled demon slayer.

Inosuke carries a distinct back story. He was raised by boars in the wild, and acquired profound ability of scent. He can feel small vibrations in the air, making him aware if a creature  carries evil intentions. 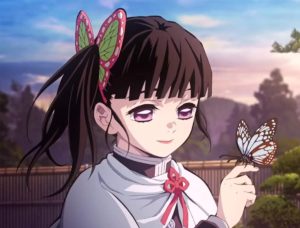 However, Kanao has problems getting involved in a social circle. Though her intellect plays as a moving element in the story, she doesn’t allow other characters to influence her decision. 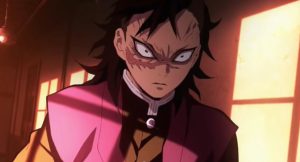 One of the tallest teen demon slayers, Gen’ Ya measures 5’11” in height. He is known of his moody and hot-headed personality.

As the series moved forward, his personality receded a little. His height, though tallest among the characters, doesn’t seem to cause intimidations among his circle. 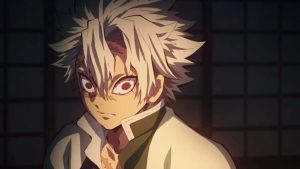 The brother of Gen’ya and is 5 years older than him. Sanemi is 5’10” in height and  slightly shorter than Gen’ya.

Sanemi plays an aggressive character. He was the main reason of his mother’s death, leading to his tarnished relationship with his brother Gen’ya.For some reason, Sanemi took his mother’s life to protect his younger brother. 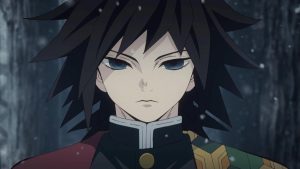 Giyu is one of the oldest members of Demon Slayer Corps. He is much taller than Tanjiro and other main characters. 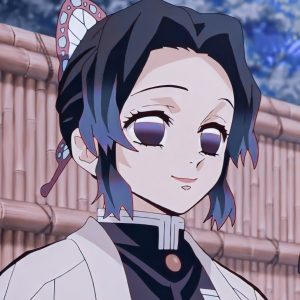 Shinobu Kocho has a height measurement of 4’11” enough to give off her charming personality. However, it’s not ideal to judge based on her height, because a matter of fact is, she conceals a vicious character.

Shinobu first appeared as a smiling lad, but as the story progresses, her witty words are enough to pull down older and taller demon slayer corps members. 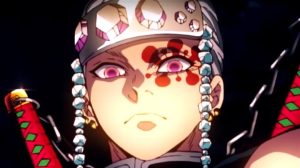 Tengen’s height measures 6’6″, a way taller than the height of Tanjiro and Nezuko. His height is both intimidating and reassuring.

His character is  hard to pull down. Tengen was trained to be a merciless ninja by his father. He was even tricked to slay his siblings so he could attain self fulfillment. When he deviated from his father’s orders, Tengen started breaking the habits imposed by him. 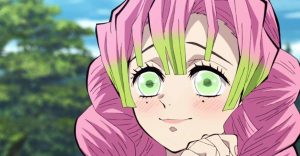 Mitsuir has an average height of 5’6″ and is also known as the Love Hashira. She is known by viewers as the girl with enchanting green eyes, bright pink and green hair.

She may have appeared few times in the show, her character plays vital role in the character development of Tanjiro. Named as the Serpent Hashira, Obanai is quite short with only 5’4″ in height. His skill as demon slayer is yet to be uncovered.

Though there’s an assumption of him being a highly skilled slayer considering he is a Hashira, his power still hides in mystery. 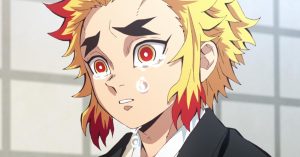 During the season 1, Senjuro was only 12 years young, with a height measuring to 5’4″ tall.

Coming from Flaming Hashiras, this did not guarantee Senjuro to possess expert-level skill as a demon slayer. He often falls short in some areas, though he works harder to follow his family’s established reputation. 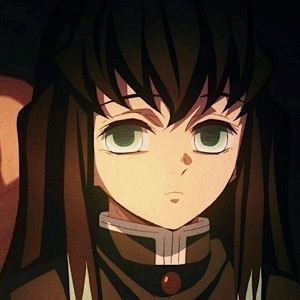 Muichiro shares the same age to that of Nezuko but he’s slightly taller with a height of 5’3″.

What makes him different among other characters is his lousy personality. Though he’s a Mist Harisha, he lacks the social skill that most of Harishas have. The culprit? Well, it’s his lack of memory. 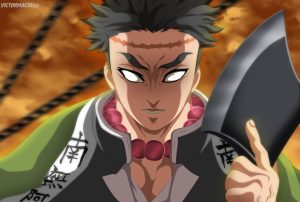 So far, Gyumei holds the record of being the tallest demon slayer with a height of 7’2″. Yet, little details are given to him as of the recent episodes.

But based on the Demon Slayer Manga, he is one of the strongest members of the demon slayer corps. 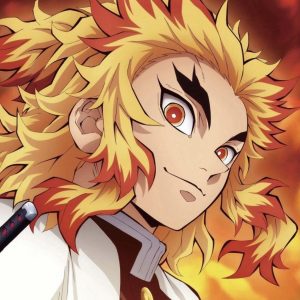 With his height as 5’10”, Kyojuro is one of the tallest demon slayer characters. His charm and personality sets a good tone on the pacing of the story. Kyojuro is remarkable for playing the good guy role. 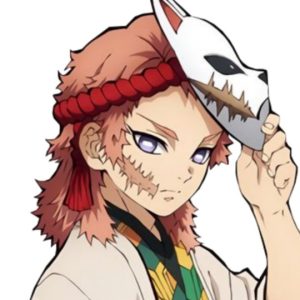 There was no remnant in the story that would tell the exact height of Sabito because he died on the earlier part of the story.

Sabito played as mentor to Tanjiro. And as everyone knows, his teachings yield a lasting impact to Tanjiro. 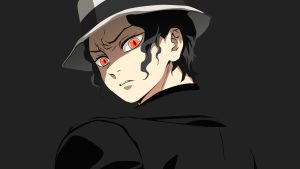 Though Muzan has a minimal appearance in the series, he is deemed as the main villain in the story. With his height as 5’10”, he owns an intimidating reputation as antagonist.

He is cunning and ruthless at times. It’s seen on his desire to even kill his own ally when he gets impulsive. 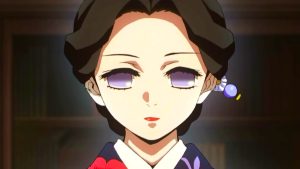 She is thought to be 4’11”, but her height doesn’t hinder her guts to stop the evil plans of Muzan.

Unfortunately, Tamayo wasn’t successful on her mission of putting an end to Muzan’s evilness. Instead, she focused on her powers on pharmaceuticals and medicine. 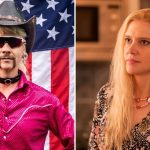 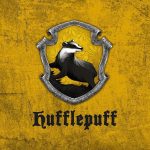