With the release of the Korean drama Squid Game last September 17 on Netflix, the TV show garnered a lot of positive reviews.  According to Flix Patrol, Squid Game is only behind the popular British drama Sex Education in the TOP TV Shows on Netflix rankings as of September 21. The success of the Korean drama raises questions and speculations among the fans to expect a second season.

Spoiler Warning: This article contains spoilers for the first season.

Squid Game’s plot and what makes it so interesting

So, what is this Squid game about? Squid game is about a group of financially broken people who risk their own lives competing in various games to win an extremely large amount of money in order to pay their debts. The game has a rule wherein if you lose, you die, and you can’t stop playing unless the majority of players agree.

Squid game is a survival drama that can be compared to “Alice in the Borderland” and “As the Gods Will”. The series can be described as a rollercoaster ride from beginning to end, combined with the frightening reality of each characters’ morality that is reflected throughout the show.

In the final episode of Squid Game Season 1 the sudden twists and turns made it a dramatic finale. However, the last episode was seemingly setting up a second season.

So I supposed there's gonna be a season 2 to Squid Game, grr.

In the last episode, Sang-woo lost to Gi-hun in the final game, he killed himself, making Gi-hun the winner. Gi-hun is returned back to the country with his credit card that contains the prize money. A couple of days later he is invited to play a final game with the grandmaster.

Upon seeing the person, it turns out that it is Il-nam – Gi-hun’s partner (gganbu) in the game also known as player 001. Il-nam explained that he came from a group of extremely rich individuals who put on the Squid Games for their entertainment. After Il-nam passed away, Gi-hun kept his promise to Sae-byeok and Sang-woo and gave their loved ones a portion of the prize money.

On the way to the airport, Gi-hun runs into a person being recruited to the Squid Game and takes away the gold card. As he is preparing to board the plane, he phones the number on the card directly speaking to the front man which we now know is Detective Jun-ho’s lost brother.

He says that he is not a horse, but a person and boldly states that he will find out the identity of the people running the game. His final words on the phone are

“It wasn’t a dream. I can’t forgive you for everything you’re doing”

Then he turns around walking away from the plane – possibly a setup towards the potential season 2?

Knowing Netflix, the potential for a season 2 of a TV show is determined by its success and popularity. Squid Game has already become popular in a matter of days like other Korean dramas such as Sweet Home and Kingdom.

Speculations about the introduction of new characters and returning ones are possible due to the number of conspiracies present in the film. With that being said, what are your own speculations towards this short Korean-thriller series? Are there enough clues to justify a second season? What alternate ending could you possibly suggest for the film? Tell us in the comments! 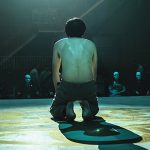